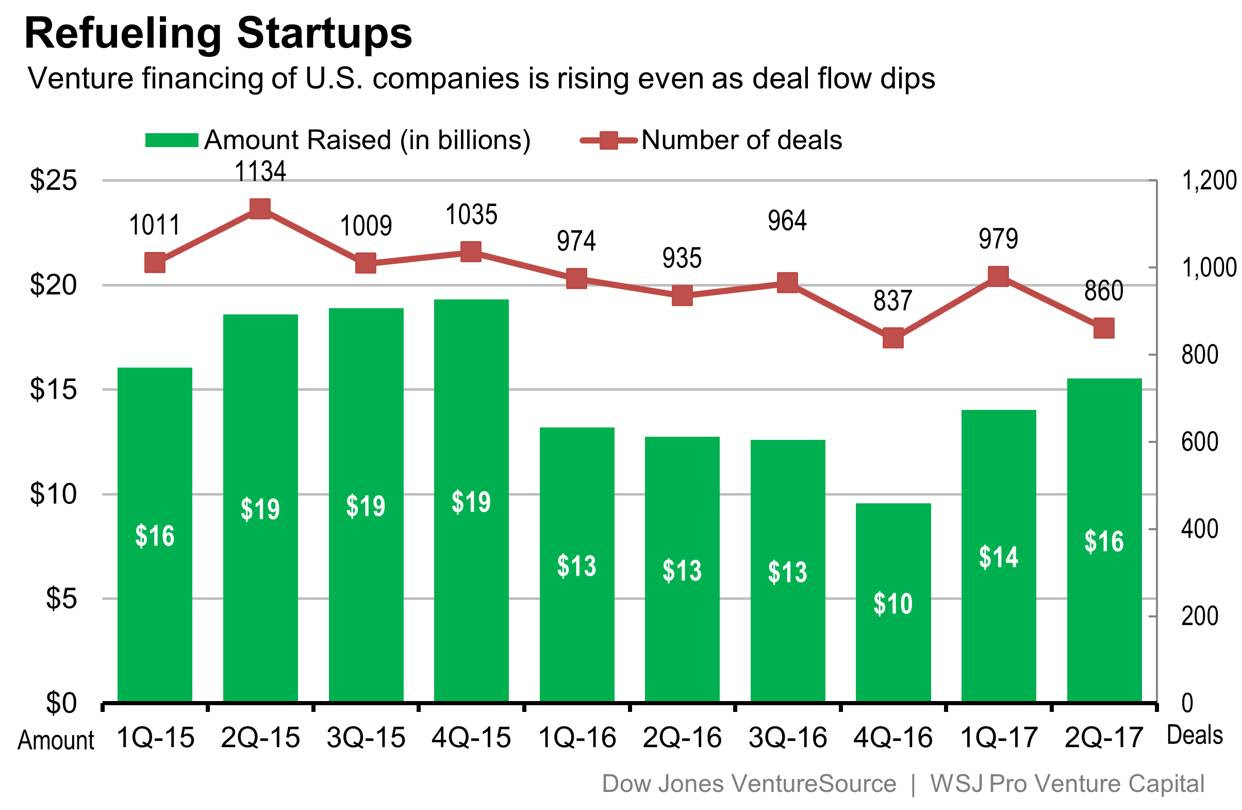 Venture-capital funding is back on the rise.

Investment in U.S. startups in the second quarter jumped 22% to $15.5 billion vs. $12.7 billion in the year-ago period, according to Dow Jones VentureSource.

The surge in funding in the first half of this year follows a cooling off in 2016, and the latest quarter’s funding marked the highest quarterly sum since the end of 2015, driven by a rise in later-stage funding and larger median deal sizes.

“Instead of going public, (later-stage startups) are pushing off the day of reckoning by raising capital in the private markets,” said Steve Brotman, managing partner at Alpha Venture Partners, a late-stage investor.

The growth in venture investing is also the result of technology growing into new areas that were previously not considered tech sectors–or that didn’t exist, said Sumeet Jain, general partner at Luma Capital Partners. Those areas include automotive, digital health, financial services, robotics and machine learning.

“There’s a lot more emerging companies in some of these new verticals that historically weren’t venture-capital industries,” Mr. Jain said. “There’s even more opportunity for VC dollars because, historically, VC dollars were addressing just consumer and enterprise technology. Now they’re addressing all these other massive industries.”

Still, the number of venture deals in the second quarter dropped to 860, down nearly 11% from the year-ago period.

By sector, information technology funding soared 42% in the quarter to $4.65 billion, compared with the $3.3 billion in first quarter. In the year-ago quarter, the sector hauled in $4.24 billion.

Investors piled back into later-stage deals in the second quarter, and getting some mammoth deals done along the way. In addition to companies staying private longer, more public market investors are entering the private markets because of the difficulty beating index funds or other passive investments, Mr. Brotman said.

While the number of financing rounds dropped, deal sizes increased in the second quarter, driven by megadeals.

While sate-stage deals surged, the median deal size in this category was $20.6 million, vs. $14 million a year ago and nearly $13 million in the first quarter.

“What’s a poor billionaire or institutional (investor) to do?” Mr. Brotman said. “You can’t make money trading in public securities. The only way to really get alpha is to invest in private securities.”